Installing CAS on the TI-Nspire CX

Two videos on how to install CAS on the TI-Nspire CX. The first video covers an older method for calculators of revision A-I, the second shows a method that works on up to revision V. Alternatives for systems that cannot use either are also provided.

This method is more recent and it uses ControlX to install the CAS OS to the calculator. It is compatible with more recent versions of the OS and calculator hardware revision. You can find the original guide here.

If this removes OS 3.6 and leaves you with a 3.1/3.1 CAS system instead of a 3.6/3.1 CAS system, I recommend you leave it like that, because some 3.1 apps (like Vpatch and ThemeEditor) don’t work on later OSes and if you do want to use them, you might run into bootloop issues when going back to 3.6.
If you still want 3.6 or 4.2 (there’s no real reason for you to in my opinion), you can get the OS, use TNOC on it to remove Boot2, and possibly Examples as well (if you want to, it’s just a waste of storage to keep Examples), rename the OS file to phoenix.tns, take your Nspire CX (while on CAS OS, if it isn’t on CAS OS you’ll replace the CAS with the non-CAS OS, which would make this whole tutorial useless), and delete phoenix.old.tns on the nlaunch folder. Put your phoenix.tns on that folder, reboot the TI-Nspire, and voila.

Alternatives to installing the CAS OS

If all you care about is using exact calculations on your TI-Nspire CX, a feature that should’ve been built into the standard model as it is on the competitors, you can use meXact/mCAS. Despite the name, it isn’t CAS and you can use it in situations CAS isn’t allowed. In fact, it doesn’t even require Ndless and will work on any unmodified TI-Nspire CX.

If, on the other hand, you need CAS but cannot install the OS onto your calculator, you can use KhiCAS. This can sometimes be a bit buggy, and it requires Ndless, but it is an alternative. 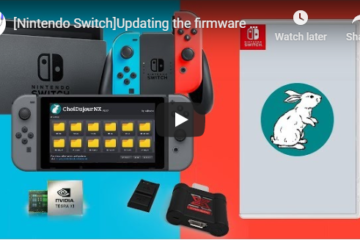 I made this one a while ago, figured I’d get some of the most useful videos here. So this video shows how to use ChoiDujourNX to safely update your Nintendo Switch’s firmware without burning any Read more…